Sasha Alexander and The Curse

And by "The Curse," I mean the title of the fifth episode of NCIS and Sasha's propensity for lesbian subtext. So, I doubt that I will have much, if any, lesbian subtext in future episodes (although Abby and Kate... "I'll show you mine if you show me yours."), but this episode... ripe with it. I seriously wasn't even watching for it.

Here's some random screencappage... I don't really know where in the episodes these took place, and didn't mark them so I would remember... I just watched and went, "Ooh, hottness!"
(Reminder: Click the screencaps for the enlarged view...) 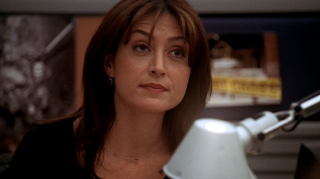 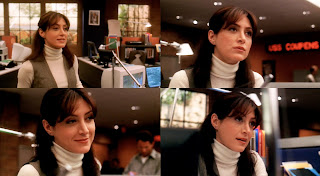 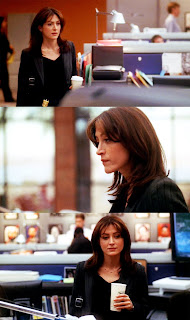 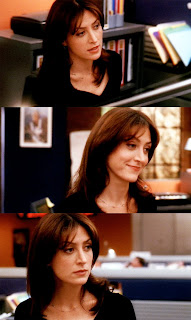 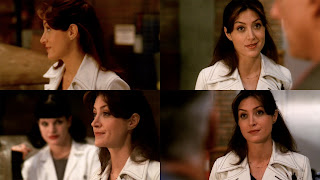 So, in this episode, the team finds the mummified remains of some Navy guy. He was dishonorably discharged because the Navy thought he stole a crapload of money and ran away. He left behind a wife and a daughter. Kate Todd went to go talk to the widow. 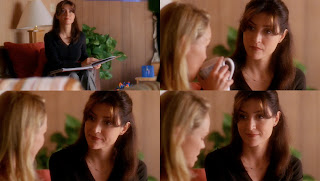 So, you could read into this scene as a little flirty and Kate being a little too interested in the case and the widow. But I'll let it slide and say that Kate Todd is just super caring.

The NCIS team thinks that the mummy had an accomplice that stole the money and killed him. Well, everyone but Kate, who thinks he was forced into it and then murdered.
So, we meet Melora Hardin's character. (By the way, LOVE her. I think she's gorgeous.) Melora's golfing at a really ritzy country club and Kate messes up her tee off (as in her golfing tee off... she doesn't get her actual tee, like T-shirt, off... not yet anyway...). They go to talk and have a drink. Scratch that. They go to talk, have a drink, and flirt. 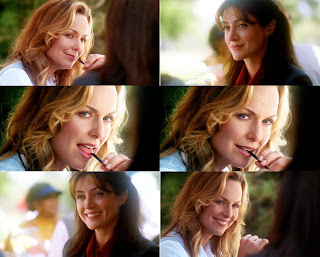 Melora tells Kate that she didn't take the stolen Navy money, but she got a giant house, a nice car, etc. because she won big in the lottery. And she also makes it clear that she isn't married. Kate, of course, doesn't take her word for it (about winning the lotto, not the married part). Melora pulls out her laminated "winning lotto ticket." Kate is still skeptical as "anyone can laminate a losing lottery ticket." Melora says she has the newspaper clipping that tells of her win framed at home. She follows this up with, "Come on home with me, honey." Kate says, "Let's go."

It all comes out that Melora is a big liar. And that pisses Kate off. Not to mention the fact that Melora didn't call the next day. She was seduced by some woman with dirty blood money. Gibbs has Kate go down to the golf course again to con Melora into coming down to the... whatever the hell you call the place they work at. Melora doesn't want to at first and patronizingly calls Kate 'honey' again. Kate didn't mind it the first time, but that was before Melora failed to call. 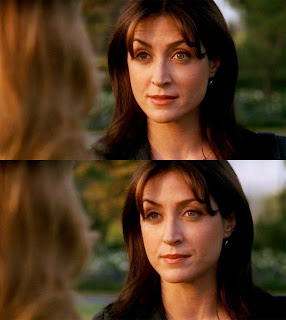 So, Kate's pissed. And hot.

Kate gets Melora down to the... NCIS place. Melora figures out that they've got her nailed (not in that way) and she tries to leave. And Kate Todd's inner top comes out. 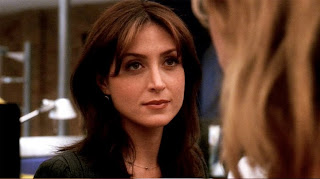 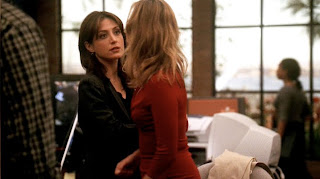 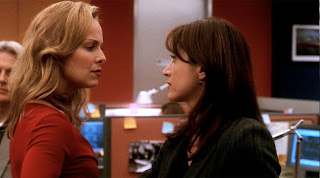 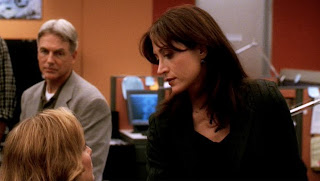 BITCH
Seriously, that last screencap, so top-o-rific. And it really makes me wish I were Melora Hardin.

I'm a little bit in like with Kate Todd.
Posted by MormonLesbian at 12:46 AM

I'm a little bit in like with your awesomeness.

Well, that's good. Because I'm a little bit in like with yours :)

:) loved the screencaps. and i see where you're coming from with the whole lesbian subtext. there was definitely some flirting between her and Melora Hardin's character lol. and she does seem like a top ;)
nice work :)
oh and the quote from ep 6 is when kate is talking to a military guy about urine samples. he tells her that they have people watch discreetly as guys are peeing into a cup then kate asks: "what if someone wanted to beat it" the guy gives her a look and she says she meant the test. it was funny.

Haha, that is AWESOME!

I haven't actually seen this episode, but I've just started watching season 1 and 2, and have fallen in love with Kate Todd. Anyways, are you going to do some more of these? Because, well, they are awesome. And so true. ;)

I will be doing more NCIS posts, but we'll just have to see how much lesbian subtext I can find...

Great caps! Forget like...I love Kate Todd! And there is definitely more lesbian subtext. Episode 10, "Left for Dead" and just wait for episode 18, "UnSEALed". I just watched it tonight and it was wonderful to hear the word lesbian out of Kate Todd's mouth. By the way, she shoots the rifle in that ep too. Great stuff and thanks for your hard work in the recaps and pictures.

Thanks for your comments! And I'm super excited for the shotgun. Because... that's hott.

I love all this stuff you post. Kate Todd was so fierce.