The star of this week's episode of Grey's Anatomy was: Arizona's boobs. "'Cause they're good boobs!"

There is some great Calzona lovin' within the first five minutes of the episode. Until it's interrupted by McSteamy. Seriously, guys ruin everything.
But if you edit the right parts out when screencapping... 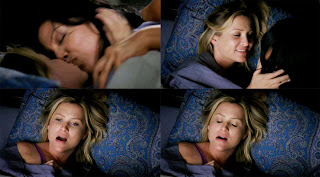 Something very different is going on. Seriously, before I saw the episode, I saw a similar screencap collage of this moment and thought that Callie was going down on Arizona. First, I thought, "Wait... But Arizona's a top... But I guess she isn't when JCap's preggers." Then I thought, "That's hott..."

We also find out that Arizona doesn't really care for Callie's BFF, McSteamy. 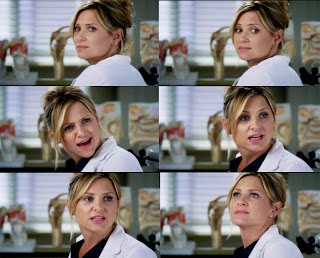 Well, duh.
a. He interrupted their sexy time (it's why I hate him...)
b. He has had his own sexy time with Callie on many, many occasions. I think Arizona treats him rather well (as in she refrains from "finding a brick.")
c. He stares at her boobs. And the only one she wants staring at her boobs is Callie. 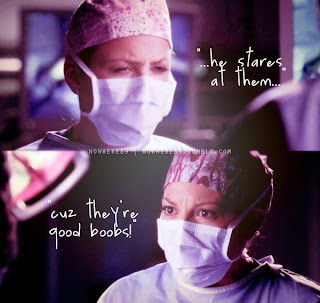 It's not only Callie and Mark (and me) that think Arizona has fantastic boobs (Come on, "good"? Talk about the understatement of the year).
Karev digs 'em too. 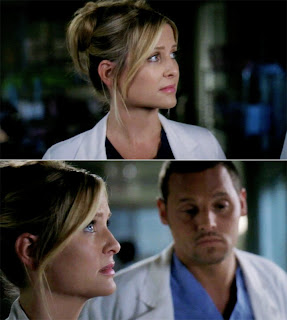 But Arizona is a good girlfriend and goes on a friend date with McSteamy. 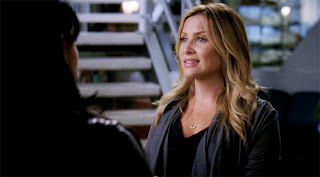 You know, if checks out her boobs on the date, it's her fault. She didn't have to pick that top. Although she'd be hard-pressed to find a top that didn't make her boobs like slammin'.

she does have great boobs :) i love her expression after Karev tells her he stares at them too!
it's crazy you can totally tell she's pregnant without seeing her belly and she looks good pregnant :)
now hopefully next week they'll get as much screen time, if not more, and talk about other things besides boys lol