...can very easily be inside of you. Sorry, it's early/late. I get dirty.
This is a very bittersweet episode. Pros: Lesbian subtext galore, no hetero beard kissing; Cons: Next week is the finale!!! :(

Note: I apologize that I'm inconsistent with my recaps. Sometimes I claim that Rizzles are already a couple, sometimes they're still on their way to... consummating the relationship. Not like you care, you just want the juicy screencaps (which can be enlarged with one simple click!)...

*Thank you, first thirty seconds of Rizzoli & Isles... Now I'm afraid to get into my car.
*Oh how I yearn to be scolded by Rizzoli... Just in private.
*Also, we learned that Rizzoli does have tee that isn't blue, grey, or black.
*Ah yes, on the scene for not even a minute. After aforementioned scolding, Rizzoli's first words, "Where's Maura?" She's really thinking, "We left my place at the same time..."
*Oh Jane, you know you love how Maura wears heels to work. 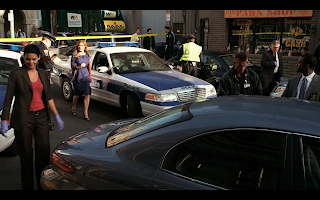 See, you smiled.
*Maura in justice robes? I'd pay to see that. We need to make that happen. 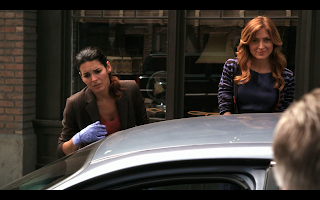 Side thought: Do they wear anything under those robes...
*Hmmm, I know what Maura's been feeling with her 250 nerve receptors per square centimeter... ... ... (Note: If you don't know what I'm implying... just stop reading now.)
*Witty banter in the morgue! 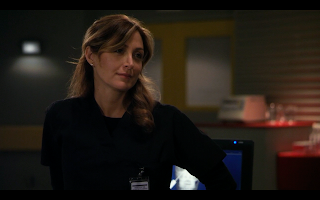 Maura, you know you love it.
*Maura Isles not perfect? Jane! 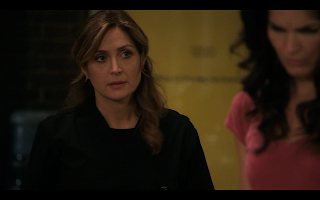 Maura's obviously a little hurt by that. "But Jane, I think you're perfect, well, kind of... sort of... At least in the areas that count."
*Oh my park bench! So precious. 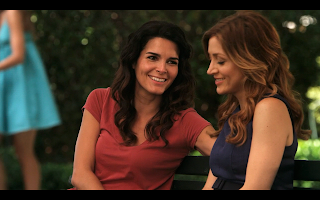 *Gifts to the girlfriend. And from evidence? She must like you more than a friend...
* 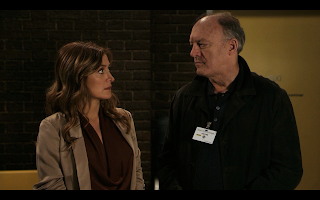 Awkward family bonding
*Of course, Rizzles always has to go home together.
Really, Maura... Calm down. She's just trying to defend your biological father because of you. It's not about him; it's about you.
*Note: Jane is really excited to be the knight in shining armor this time. She's had enough of Maura being the protector.
*Maura goes off to the morgue alone to go over the body one more time. Jane, of course, wants to go with her, saying, "She shouldn't be alone" because she needs me right now. And my lovin', touchin', squeezin'. Korsack says, "If you love her, let her go." Or, you know, something to that effect.
*Maura's snatched! And this is where I tell myself over and over that nothing bad can happen to Maura since she's essential to the show. 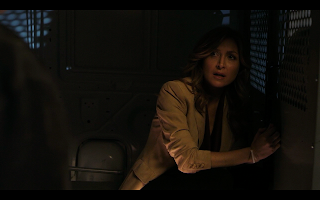 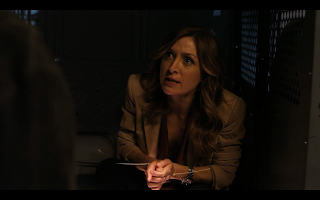 She's obviously got nothin' on Angry Rizzoli, but I still wouldn't mess with her.
*Maura tells Daddy Doyle, "I can take care of myself." This of course means that she has a Jane to take care of her.
Daddy Doyle-- "I know you've got people close to you in homicide." And from what else he knows about Maura, he knows just how "close" the two of them are... That's all in the other set of pictures he has.
Listen, Daddy Doyle. I know you feel protective of Maura, but you'll have to beat Rizzoli to the kill first.
*Jane is very worried about her woman. Phone rings and she answers, "Whatever you want I can get it." Awwww...
Oh good, it's Maura. "Can you get to my apartment?" (Mmhmm... Cuttin' to the chase. Apparently there's no need to be debriefed about what happened or anything... Well, "debriefed" in the legal sense... I guess being kidnapped is less traumatic if it's by your father...) Frost gets up to offer help. Jane immediately says, "No, she's okay." As in, "Sit down, son. We need alone time." And Jane literally runs to her woman.
*Maura is concerned that she is like Daddy Doyle. Jane comforts her, "You're the same ridiculously smart, amazing, goofy person that you were before." "Amazing" is code for "sexy." Or you know, just finish the thought... "Amazing... in bed."
Maura loves the compliments. 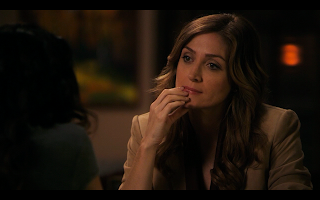 She really loves the compliments... 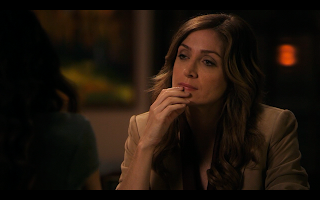 Note the bedroom eyes...
*Okay, only lesbians and people who were adopted are so defensive about nurture trumping nature when it comes to the sperm donor issue. Trust me, I can vouch for both counts.
*Cut to Papa Rizzoli... His plumbing hat is so cute!
Oh, Frankie, Frankie, Frankie! Don't get a man to do a lesbian's job...
*Hand holding! 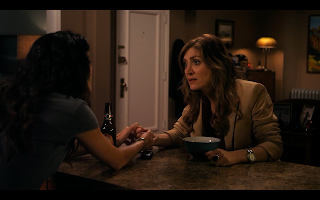 Interrupted by a knock at the door... Jane is thinking, "Who the f--k is interrupting my alone time with Maura?" The only answer is to shoot them.
Frankie, you ruin everything! But at least he knows it... "Oh, Maura, hi." No surprise at all. Of course she's here. Obviously Jane's family knows she's gay and with Maura, even if she doesn't realize it herself.
*Maura gives a half-hearted wave. 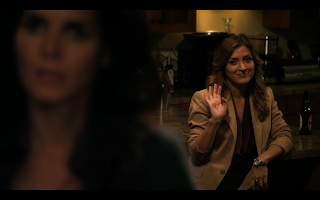 "Yeah, thanks for interrupting our tender moment!"
*See! What'd I tell ya. Don't let a man do a lesbian's job! Seriously though, Maura knows her way around cars and plumbing... Of course, Butchy Rizzoli won't let Maura show her up when it comes to "plumbing." Apparently that's what the kids are calling it these days...
*And just like a femme... "Ooh, I can help!" 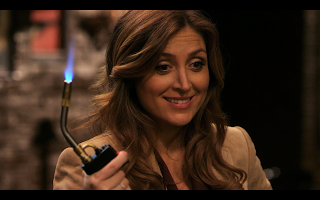 But how could anyone say 'no' to that face?
*See, Maura. The only family you need are your crazy in-laws.
*Daddy Doyle kills the bad guy. Hooray, Maura's safe. For now... (Hoyt came back. I wouldn't be surprised to see more of the Irish baddies in the future)
*Meanwhile, back at the bar...
Maura and Jane cling onto each other. Really, this moment wasn't dramatic enough for that to be called for. They just need an excuse to hold hands. 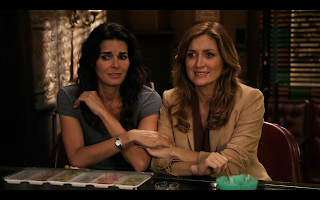 *"You're a genius" and you sure know how to handle a pipe... and other phallus-shaped objects...
All accompanied by back rubbing. 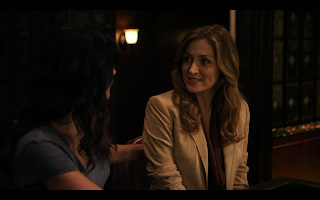 More banter with Maura poking Jane in a flirtatious manner.
*Mi hermano es su hermano. See, Jane's family is all you need, Maura.
*And that's how you end a Rizzoli & Isles episode! With Rizzles together! Throwing nuts. And giggling. 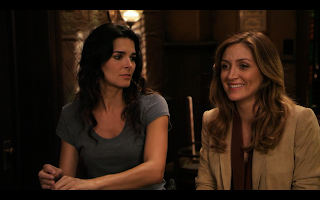 Posted by MormonLesbian at 4:08 AM

- "Who the f--k is interrupting my alone time with Maura?" The only answer is to shoot them.-

So true, so LOL - thanks for the very quick recap. There was really no way I could have started my Tuesday without one ;-)

MormonLesbian, you along with thejollyape over at Rizzoli & Isles Femslash, make my Tuesday mornings with your recaps :) So thank you!

Hmmm, thejollyape... I'll have to check 'em out.

And as always, thanks for the comments!

Thanks for another great recap! I commented over at Jolly Ape how wonderful it is to have multiple subtext recaps to look forward to after each episode.

"Apparently there's no need to be debriefed about what happened or anything..."

I know, I kinda laughed about that - you'd think Jane would say, "Can you get to the police station?" But nope - let's head straight to the intimacy of Jane's apartment.

Great screenshot of Maura's wave to Frankie; like she was saying sheepishly, "Uh, yeah, here I am again at Jane's in the middle of the night."

<3 the screencaps and your recap

Another great recap! Only one left :(

Yeah! Another great recap. I saw that flirty poke at the end too! A great episode of touching, intimacy, and bonding. Have you recapped all the episodes so far? You may have to go back and start over to help us have our fix after next week's season ending.

I've been thinking about if I wanted to start at Episode One since I started at Episode Six, I believe. I'd totally do it if people were interested.

the review might be a little long. this part had me laughing so much but i'm in a library so i must be quiet: After aforementioned scolding, Rizzoli's first words, "Where's Maura?" She's really thinking, "We left my place at the same time..."
LOL. and i loved when jane gave maura the gift even when it was evidence. you can already tell jane doesn't care about evidence if it puts a smile on her girl's face. and also when jane said that maura can keep it for now we all really know she meant keep it forever unless we need it but then you'll get it right back and there is nothing sweeter than when this moment happens: Jane is very worried about her woman. Phone rings and she answers, "Whatever you want I can get it." Awwww...
and you are so completely right when frankie comes to jane's apartment there is no surprise about maura being there even though they mention its the middle of the night