Last week, I came out to my best friend. Kind of...
Being Mormon, having a very Mormon best friend, and going to a Mormon school makes things... interesting. As if someone's coming out is every boring... Everyone's coming out is difficult and everybody's situation is different. However, the fact that I could get kicked out of school for my sexuality made me, well, wary.
Anyhow, we were having a self-revelatory/secret-sharing type of day and I volunteered the fact that I am attracted to women.
I say "kind of" because I came across like I was just bisexual... But if she ever went through my computer and saw my extensive image collection of Rizzles and other hotties, well, she'd know the truth... Also now if she ever stumbled on this blog, she'd know. But I figure if anyone I know stumbled on here, they'd know. I don't hide my Rizzoli & Isles obsession and I feel like I have a relatively distinct writing style. (This is where I'll stop myself from pulling a Dr. Isles and discussing the methods they have to identify a person's signature writing style. But they do have such methods... and they're fascinating!)

I had imagined coming out to my friend many times, but in these imaginations it was always out of necessity. "Hey, you know my 'roommate.' Yeah, well, we're having a baby. Together. In a more than friends way."

It actually went much better than I could ever expect.
She's very nonjudgmental. And supportive. Of course she expressed her desire that I choose not to act on my "feelings of same-sex attraction," as they say... But she doesn't look at me differently. And didn't have one of the common reactions some straight girls do of, "Oh, are you attracted to me?"
She even thought I could tell some of our other friends. To which I responded, "I doubt they'd be okay with it." And she said, "Well, then they're losers."

In other news, here's some Rizzles love! 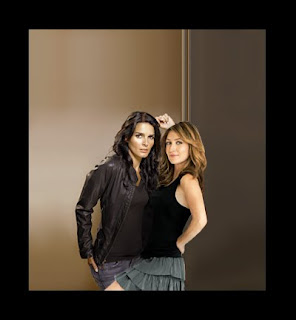 Tomorrow, I'm planning on posting a lovely Sasha/Angie interview!
Posted by MormonLesbian at 1:29 AM

Congratulations! I'm glad that you seized the opportunity and that things went well. That takes courage no matter if it is the first time or the 50th time. I appreciate you taking the time for your blog...you help me stay so informed. I'll be over here waiting for that interview. I hope we get some new ones since the show has been so successful.

That's really awesome about your best friend. That must have been so nerve-wracking. I'm glad it went well. You're very brave.

Thanks. It was a little nerve-wracking. It helped that it was three in the morning, which tends to weaken one's inhibitions.