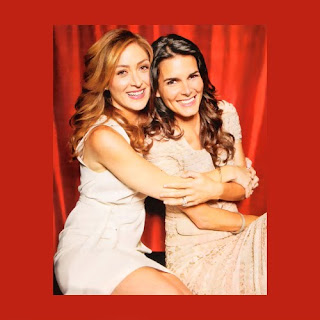 (Thanks to Elzy for better quality version of the pic!)

Do you like being compared to Cagney and Lacey?
Angie: Absolutely!

What accounts for the mismatched pals' hugely entertaining womance?
Sasha: We have so much fun it actually makes our husbands worry. We want to portray our characters as strong, smart women who respect each other. Yeah, they have sleepovers, share a bed, their clothes, their makeup. But that's part of the ritual of being a girl. The fact that they argue also adds to the womance.
Angie: But they won't fight over the same guy! Not all women are like that. We've read scenes that could almost get to that hair-pulling place, but Sasha and I work to not have it go there.

Their friendship seems like one big pajama party.
Sasha: It's sexy and hot, admit it, Angie. [Laughter] There were a lot of blushing men on set when we were in bed for the first time and having a good time.
Angie: Then we cracked a joke about having a pillow fight in our underwear. The men were stunned--for a second. 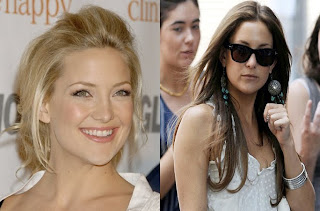 I prefer Kate Hudson as a blonde. However, she does look good in this picture as a brunette.
Kate Walsh 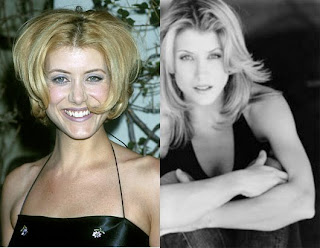 Kate Walsh is actually a natural blonde. Most websites show the picture on her left as her with blonde hair... which is rude. Because she doesn't look so great in it.
Now, Kate Walsh fluctuates from being a brunette to a redhead.

We all know and love (or you know, don't love) Katherine Heigl as a blonde... 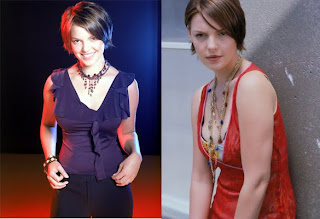 But she was a brunette for the third season of Roswell. Personally, I don't think these pictures do the hair justice. When I watched Roswell, I didn't really care for Isabel (yes, that was the character she played). Then third season came around... And I approved of the short, sassy brown hair. 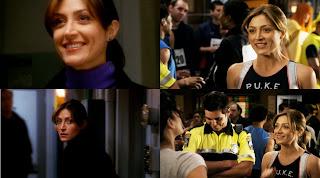 I think the thing I like most about the Maura hair here (over the Kate Todd hair) is the little waviness. Very cute.

Coming Tomorrow: My Final Maurizona post (until next summer... or until some more Maurizona inspiration similarities strike me, but don't count on it).
Posted by MormonLesbian at 12:43 AM

that photo of Kate Walsh is very unfortunate. i like her best as a redhead :) and i think the scene that the Maura photo is from is just overall very cute!

Mmmm, yes, I do dig redheads as well.

Maura was so adorable in that scene. So smiley and you just want to pinch her cheek. And then do horrible things to her.

well yeah if she wears an outfit like that ;) lol

LOL at the ponytail edition! I prefer Maura's hair over Kate's but I love both eitherway. (does that even make sense?! ;) )
I love Kate Walsh as a red head, I know she's blonde, but she looks so good as a redhead!
and thanks a lot for posting that awesome interview! :)

Yeah, I totally get what you're saying. I also enjoy Sasha's hair, regardless of color :D

That interview is GOLD. And yes, I want the underwear fight too. Something tells me their husbands' might go for it as well...

If they didn't approve, they're idiots.

You never disappoint! Is this the TV guide issue for the coming week? What a great interview but I don't want it all to just be about best girlfriends and men's fantasy. I guess that just cheapens my view of Jane and Maura in love. But I would still watch the pillow fight as a DVD extra. Thanks as always!

Yes, this is this week's TV guide. I totally just ordered it off of EBay yesterday when I heard about it.