11 Signs That You Are Gay

All of these are drawn from my own life where I should have gone, "Oh, I'm actually a raging homosexual." So, I decided to write a little posty post because of the many times a day, when I'm reflecting on my life, I think, "Damn. How did I not know?"

11. I was six (yes, six) and seven, and I had a crush on my 1st/2nd grade teacher. She's a woman (and seriously? Gorgeous with great hair. Well, from what I can remember). And I had a crush on another girl in my class, Whitney. She was one year older, brilliant, and fantastic. I didn't know that they were crushes at the time. I just knew that I wanted to be near them all of the time, I gave them my desserts from my lunch, and I loved the way they smelled. I always found excuses to hug them, which they (well, just Whitney) thought was weird.

10. I was ten and had a huge crush on a friend. Once again, still didn't know that that's what it was. I got very jealous of the boys she "dated." And I would always talk about how she was the prettiest/funniest girl I knew. P.S. Not that funny. Just pretty.

9. When I was in middle school, I secretly checked out books from the library about gay people. I remember my friend saying that she checked out a book and stopped reading when she realized it was about gay people and she just couldn't relate to the stories. 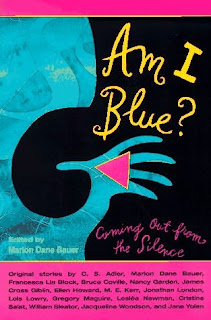 So, I promptly went to the library, checked the book out, and hid it so my mom wouldn't find it. What was my justification for this? I don't even remember. 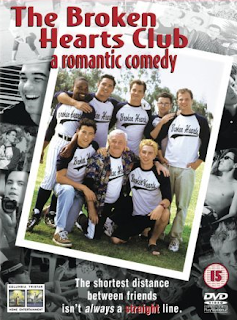 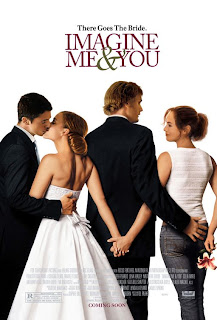 And watched Logo when it launched. 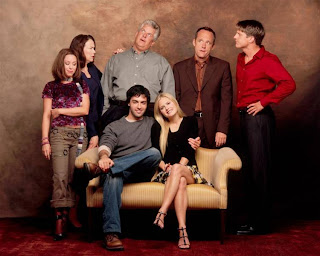 (They aired re-runs of this show... If you can name it, then I'm gonna think you're awesome... more awesome than I already think you are.)
If you took note, my selections were gay men-inclusive, which may be why it didn't sink in that I was a big ol' lez. Anywho, I could seriously talk about my long-standing love of gay media for days...

7. I was obsessed with TLC's Trading Spaces and While You Were Out. Not for the same reasons as my straight girl friends... Well, I do like the design and whatnot.
But Ty Pennington and Evan Farmer? 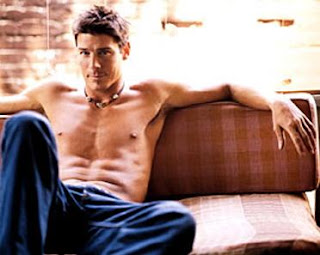 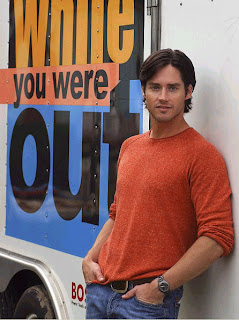 No, thanks.
I preferred Hildi Santo-Tomas, 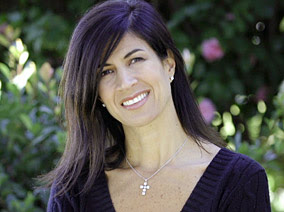 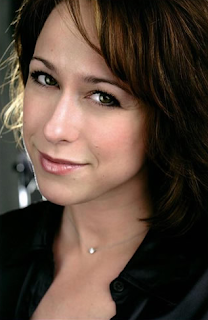 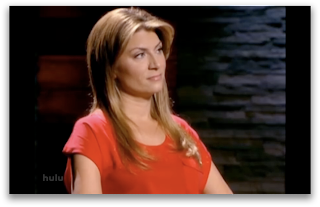 And What Not to Wear... I do love the fashion stuff, but it's all about Stacy London... 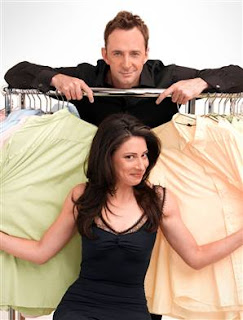 ...In heels and hot clothes.

6. So, you may or may not have heard of the game, "F---, Marry, Kill." You get three celebrities/people and you have to say who you'd eff, marry, and kill. The Mormon version is "Kiss, Marry, Kill," which I think rolls of the tongue nicer, but whatever. My favorite match-ups since I was in middle school were those with all women.

5. I hear that most straight girls enjoy kissing boys. These words have left my mouth, "I enjoy kissing my dog more than my boyfriend." (And the boyfriend thing... long story...)

4. My boyfriend and I did check out the same girls... And he totally called me out on it. We also had a very heated debate about whether or not Julianne Moore is hot. 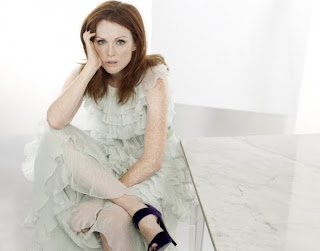 My boyfriend was an idiot.

3. On my computer, I had a file folder full of pictures of hot actresses (still do, well, several folders). I told myself that it was just because I thought they were good actresses. Which for the likes of Michelle Pfeiffer and Catherine Zeta-Jones... 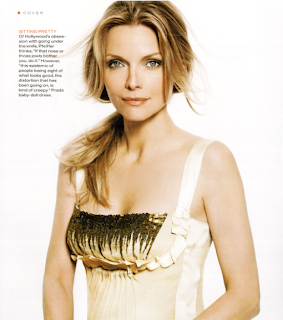 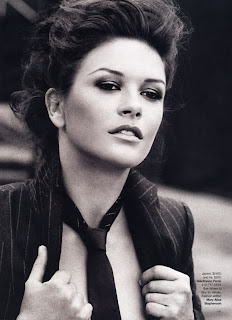 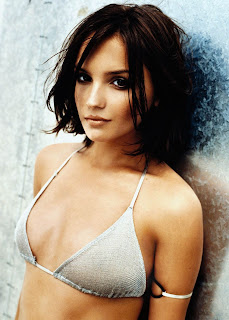 Three words: She's All That.
But still, even if I liked their acting, why did I need pictures of them?

2. I just about died when Arizona Robbins said, "I had a poster on my wall of Cindy Crawford, and I wasn't just lookin' at her mole." 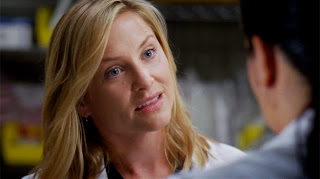 I remember the Pepsi commercials with Cindy Crawford from when I was a kid quite vividly. What reason is there for a straight girl to enjoy those commercials? How did I not know? Because, honestly, I wasn't just lookin' at her mole. I actually thought that she was in Coke commercials. That's how much I was paying attention to the product...

I gotta say... I prefer the older Crawford.

1. I had the biggest crush on Michelle Pfeiffer. I watched I Am Sam hundreds of times because... damn, she's hot. I mean, I think I would have still liked the film, but Pfeiffer made it my obsession for a summer.
I should have known I was gay when I said that I liked Grease 2. The movie is not good! But Michelle Pfeiffer is hot.
Then in my freshmen year of college, I got in a very serious debate with my boyfriend's uncle because he didn't find her attractive. 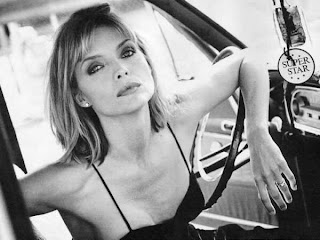 Honestly, I'm not an idiot. And I wasn't an idiot. Just blind. Like a certain medical examiner once said, "It only takes 150 IQ points to be a genius." 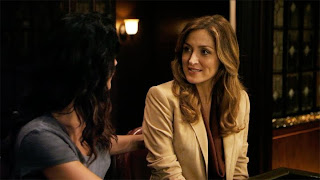 And that same medical examiner (and her detective friend) prove that you can be really smart, perceptive, etc., but still be blind to your own blatant homosexuality.

Were there any obvious signs that you missed growing up?

i had crushes on older girls when i was kid but i thought i was just looking up to them.
i only watched What Not to Wear and any other show on TLC because of Stacy London or some other hot chick but this was after i came out.
oh and that show is It's All Relative but i cheated :)

Paige Davis! That was the only reason I would watch TV with my mom, not that she knew that...

How exactly did your boyfriend and his uncle not point out to you that you were so, SO gay? XD haha

Right? Boys are dumb, haha. The uncle had very little interaction with me, so that's his excuse. The boyfriend... Lordy.

i could say, 'uhm yeah, how did you not know you were gay?' but I won't because I can say the same about myself lol. sooo many things that are obvious now! like my crushes on older girls (honestly, I was looking up to them! ;) ) I used to love Xena when I was like 11 (which only now do I realise is a totally gay show)
and I had loads of posters of women, let's say in Az style, I wasn't looking at their moles. I had a massive crush on a Dutch actress,for like, years, and cried so much when they killed her off! lol, so yeah, my point is, your not the only one who didn't spot the obvious signs. :)

Yes!!! Sooo obsessed with Xena. I totally forgot about that! My brother and I would watch it together... for the same reason haha.

Honestly I'm still questioning, but I remember being as young as 9 and being aroused by the sight of women's breasts (mainly on HBO movies I wasn't supposed to be watching). I also remember a guy in high school showing me a porn magazine with pictures of female genitalia and asking me "which one was mine, and I just stood there and got aroused when I should have punched him in his mouth. During my senior year in high school I began to have fantasies about other girls, and as an adult I had a crush on an actress who was on "Passions" (which went off the air in '07).

I remember being 18 and telling my parents how I felt. They told me that it meant nothing, and that I needed to be with different people before I knew for sure. I'm 30 and still haven't been with anyone, man or woman. But I'm becoming more convinced I'm gay despite this setback.

I have no clue either. Most of the time I'm convinced that I'm straight but other times I have no clue and it's painfully aggravating. I'm 20 and my only serious relationship was with a guy and I ended it after like 2 weeks. I couldn't help laughing almost anytime he kissed me. It felt like some strange reflex and so it confused me. Was I not attracted to him or was I not attracted to men? My obsession with a danish male actor, Mads Mikkelsen is almost matched to the obsession I have with Angelina Jolie. I've had crushes on men and women but I can't imagine myself as a bisexual. Still wondering...