Angie Harmon as "The Other Woman"

This is a very Angie week.
1. In case you missed the global fangirl freak-out... Yes, Angie Harmon is now on Twitter (@Angie_Harmon).
2. I had my Angie Appreciation Post.
3. I had my last pizza/Rizzles night with my best friend/roomie and our other friend. And our friend, straight as can be (seriously), is in love with Angie Harmon. So, watching Rizzles, all I hear is, "I want Angie's head." "I want her face shape." "I want Jane's clothes" (she's all about the Jane Rizzoli/Diane Keaton/Katharine Hepburn style... it's awesome). "I want Angie's body after I have children" (not in THAT way... Like the way I want Angie's body...).
4. My friend/former roommate is in North Carolina right now as a Mormon missionary. So, I wrote her to ask her to hunt down Angie Harmon (since she just moved to Charlotte). Not to convert her, just to like attack her and hug her for me, haha.

And I'm so not sick of her. Sooo, in an effort to procrastinate for my final final (hee hee), I decided to watch/screencap Angie's episode of Samantha Who?

In case you didn't follow the show: Samantha (Christina Applegate) was hit by a car, sat in a coma for awhile, woke up, and now lives with retrograde amnesia. Occasionally, she does get flashbacks from her life before the accident. Essentially, she was a terrible person, but now she's nice, adorable, and awesome. She briefly dates some billionaire, Winston Funk, whom she slept with pre-accident whilst he was married. And we find out in this episode that he was married to... Gigi (Angie Harmon).

*So, I'm watching the episode and thinking, "Christina Applegate is adorable/hot!" 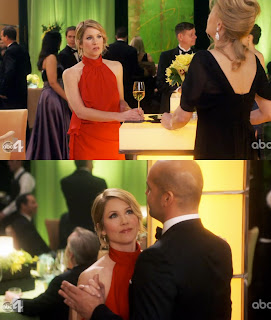 Funk is trying to woo Samantha back to him. Because, shoot... Look at her in that dress!

*Then... on walks Angie.
I was just on my bed, minding my own business... waiting for Angie...
Posted by MormonLesbian at 1:40 AM

love it!! it was totally awesome :D
and when i saw my mention i literally went "yessssss" *fist in the air*

Shoot, I'm not going to take credit for your awesomeness!

"1. In case you missed the global fangirl freak-out... Yes, Angie Harmon is now on Twitter (@Angie_Harmon)."

And holy mother of pearls.. Angie is friggin sexy as hell in green @_@

Yes! She should always wear green...

Totally irrelevant, but it's amazing.

Oh, and your blog is amazing.

Honestly, I only watched this for Angie, but I was like OMG freakin hell sexydamn when I saw her.

She was awesome in this - but I agree, I missed her voice.

this goes without saying but angie harmon has amazing cleavage. don't you just want to bury your face in it. lol