My Favorite R&I Scenes: The Pilot

I needed an excuse to re-watch Rizzoli & Isles. Not that I need one... Well, I guess I really needed an excuse to post about Rizzoli & Isles. Not that I need one there either... Anywho, I wanted a fun activity for procrastinating some work so I decided to post about my 10 favorite R&I scenes, but I knew I would never be able to narrow down my selection unless I picked one scene per episode, and even that proved impossible.

You may be surprised that my favorite scene isn't this one: 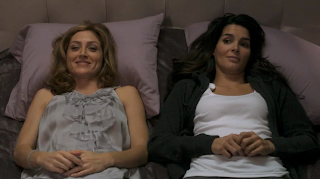 Or maybe you aren't surprised... Shoot, I don't know your life. I am a fan of the bed scene, of course... It's "just special, original, magical, squeals of joy," but it's just not favorite. I mean, they are talking about who gets to date a boy... Who wants that?

And then there's the "tuna sharing" scene... I do love this scene. Yeah, yeah, there is the obvious metaphor of tuna=well, you know... But, personally, I'm all about the 'sexy scientist' look Miss Dr. Maura Isles was rockin'.
*Maura's Face: Ooh, Jane's here! 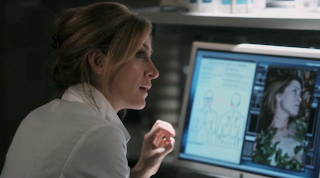 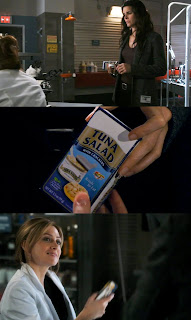 *Delicioso! (The 'delicioso' is for Jane eating the tuna... not about Agent Dean's entrance... ew, put that away). 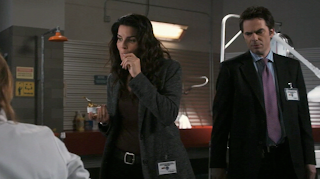 *Can we talk about Agent Dean's face/reaction to the tuna real quick? Is this still going off of the tuna metaphor? If so, maybe that further explains the lack of chemistry between him and Jane... just sayin' 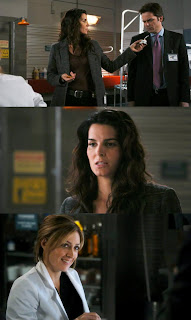 Jane: Guess it's a chick thing.
Yeah, yeah, chick=lesbian, blah, blah, it's been almost a year and we have already beaten all of these jokes to death.
*And Dean has to ruin the light atmosphere of tuna sharing with news of Hoyt's escape. (I didn't feel I needed to put a screencap of him talking because we don't want to look at him... well, I don't...) 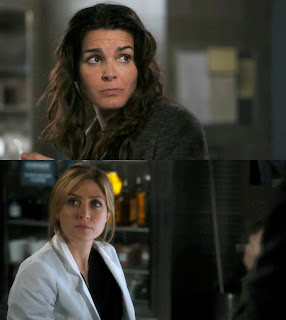 Note the fact that Jane needs to wipe a little tuna residue off her mouth... (You can really see it if you click on the picture to enlarge, which is a reminder I haven't given in many a-posts)
*Sad Jane 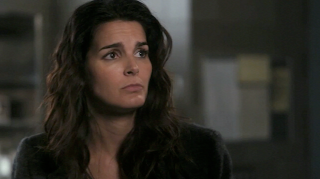 *And then Jane and Maura share a look. Maura's concerned for Jane and Jane is scared. 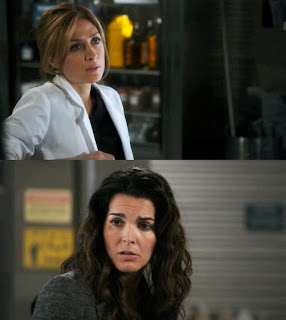 I'm convinced that if Dean weren't there, this would have ended in a tender embrace between the two. Actually, who am I to say that didn't happen?

For me, the first crime scene is just more favorite. Side Note: Yeah, I know I've been abusing the word 'favorite,' and if you don't get it, it's because you've never seen/heard Brian Regan's bit about Little League and sno cones...
The first crime scene is when a lot of people started shipping the two. And there is the obvious sexual tension. On top of all that, this is the first thing I screencapped in my life... I screencapped this episode first on the TNT website, which --lemme tell ya-- is really difficult to do and can be a pain. Actually, I thought it was really fun and had a whole system for doing it (because I'm a little bit OCD, but who isn't), but it was time-consuming and involved watching the scene over and over... and over.
Anywho! 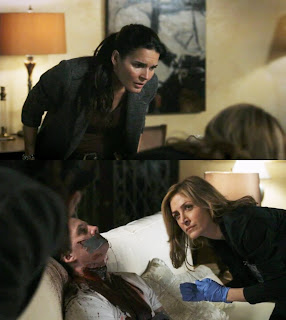 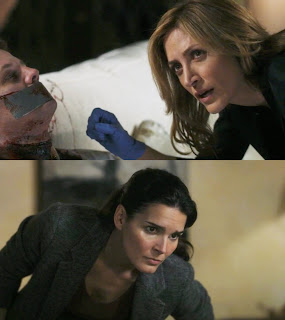 *The best part is that Korsak has no idea what's going on and thinks they are still talking about the body. 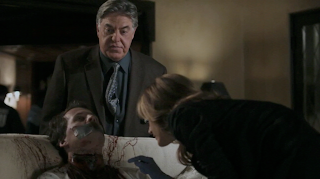 That actually always bugged me that when Maura talks about Jane's hairline fracture to the nose, Korsak doesn't catch that Maura is obviously not talking about the dead guy because his nose is fine... but whatevs...
*Can we just look at how Jane looks at Maura? 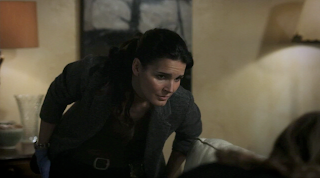 Precious, right?
*Maura: Let's do "yoga" together because sex injuries are way hotter. 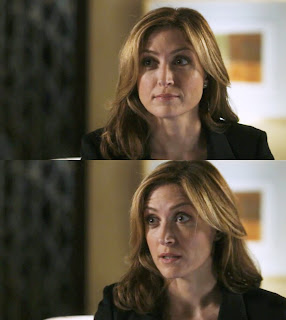 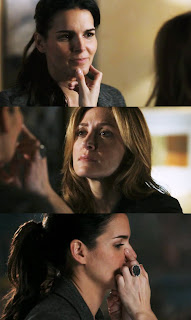 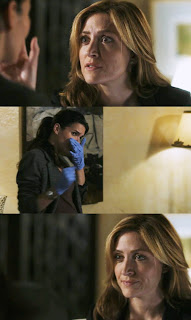 *And then Dean walks in, which starts the whole sharing stolen glances bit... 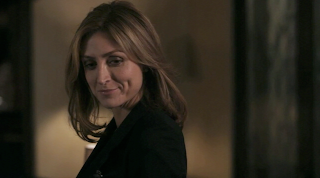 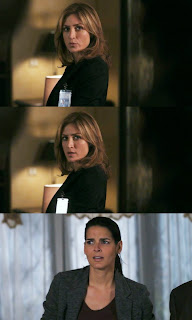 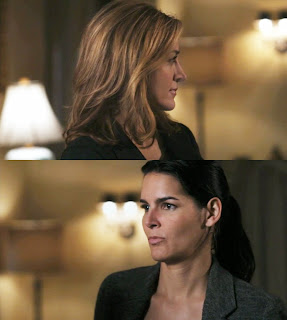 Ending with Jane's "You're leaving?" face 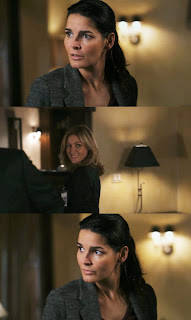 Jane: Sad face...
Plus, Maura was super saucy right there behind Dean's back...

I mean, seriously, this whole scene made anyone with even the crappiest gaydar go, "Wait a second... What's going on here?" Or what my mom said, "Are they more than just friends?"

So, what's your favorite scene and why from the pilot? And this question is probably directed only at Nikki since she'll probably be the only person who will comment. And yes, that was totally me fishing for comments right there and asking for you to prove me wrong :D

Friday: Grey's Musical Recap!!!
Sunday: Hopefully I'll have a Sunday Post... as last week it just didn't happen.
And I have no idea when I'll post the next installment of this new post series... I already have the screencaps for it so it should be up next week some time :)
Posted by MormonLesbian at 6:08 PM

Proving you wrong. ;) My fave scene, after the subtexty first crime scene goodness, was Maura's arrival at the first crime scene. One word? Boots. (and if you didn't see that coming, then you don't really know me, lol.) Third is Maura showing up at Jane's apartment at the end with a baby tortoise. :)

How long have you had a thing for boots?! ;)
I do like the end scene too, except for the tortoise part... since tortoises are creepy... haha

ten?! not eleven, what about your OCD ;) lol
there are so many good scenes, how could one possibly choose??!?! but i'm gonna have to go with the scene that...pardon me the sceneS in She Works Hard for the Money that involve Maura, Jane and Angela. because i love Maura's reaction to how Jane acts around her mother :) but you know my favorite episode is Money for Nothing but i love almost every scene so it was too hard to choose :D

Well, I can't exactly just make up an eleventh episode, can I? ;) hehe

Whoa, whoa, slow down, Nikki. I asked favorite scene from the pilot. We're still only on the pilot. And you're just jumping ahead three/four episodes!
And I love how we have already talked about the Jane/Maura/Angela scenes and Money for Nothing :D

oh...ha ha ha...awkward...well then definitely the scene where Maura fixes Jane's nose cause one: she touches her and two: there's foreshadowing :D but i don't really like the pilot that much anymore...
i'll just cut and past that last comment for the post about she works hard for the money episode :)

love your RI screencap, God I miss both of them

and 11 more hours for Greys!

One thing I do love about that bed scene, is Maura just resting her hand on Jane's arm and telling her everything is fine, urging her back down to sleep. Love that moment.

And yes, Maura being saucy at the crime scene will always be gold.

Hello mormon girl!, i just found your blog by chance and it so great, i love your coments some are so funny!!

I just downlaoded this tv show and i cant wait to see it lol, i love this ladies, so cute together!!.