I stole this idea from my husband's blog. He wrote some of his quirks in a post and I want to be like him, so I am copying him :D

But first off, a few words (i.e., a novella)... My husband is amazing. I talk about him all the time because I just want people to know how fantastic he is. He has helped me to feel better about being gay, but mostly he has helped me to feel better about being myself. Honestly, every time since I’ve met him that I have felt down about myself or had one of those days where I wish that I had never been born, he has cheered me up. He is just exactly what I need--being able to pull me out of my headspace, all by simply telling me, “Bitch, I am picking you up in fifteen minutes and we are hanging out.” I get into moods where I could easily sit at home for days, never leaving my house, and just watching TV, wallowing in annoying self-hatred, crying, etc. But he has seriously saved me so many times without even knowing it--all because he’s him. Sometimes I feel a little bit like a user, or needy, or like I’m getting way more out of the friendship than him, but I like to think I make up for it with my dazzling smile ;)
Essentially, he is awesome. He is one of the most caring human beings I know. He is sincerely interested in people and does so much for others, simply because he has a great heart. And he’s hilarious, I mean, he can make me laugh inappropriately loud in the middle of a serious panel about the LGBT community in Utah all with just one look... I don’t know what I’d do without him. But I totally want less of his love because I want him lovin’ on some really hot man ;) 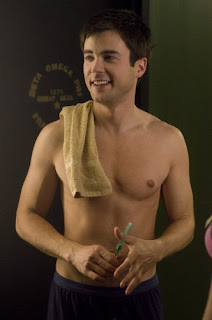 (Dear Husband, You'll have to tell me how I did in my selection of a "hot man")

1. When I'm in the kitchen, I often stand like a flamingo with one foot resting on the thigh of my other leg.
2. Before I started using my phone as my alarm clock, I used to always have my clock radio tuned to a mix of mariachi music and static.
3. I'm a little OCD when it comes to numbers. If I set my alarm clock, a timer, the microwave, etc., the number has to end in 3, 7, 8, or 11. The system is more complex than that, but I don't want to take the time to explain it... I don't really think the world would end if I didn't do this, but I've never set the time differently to find out...
4. Because I have scoliosis, my jaw clicks. It sounds like I'm cracking it and I sometimes unconsciously click it in class.
5. If I get a TV show from Netflix, I'll watch the whole disc in one sitting--usually on the same day I get it. If I get a movie, it will most likely sit in my room for two weeks before I send it back, unwatched, because I never think I have the time or patience to sit through a two hour movie.

What I just rented/watched today: 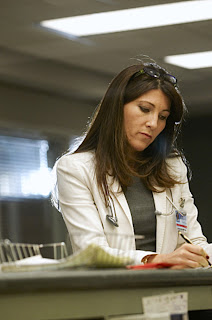 6. My immediate family are the only people who have seen me cry (aside from when I was a baby). Not even my best friend of 17 years has seen me cry.
7. I have been known to randomly pronounce certain words with a Southern accent.
8. I have never driven with shoes on. In high school, I had an extra pair of shoes in my car because I would often forget to wear them.

Angie with no shoes: 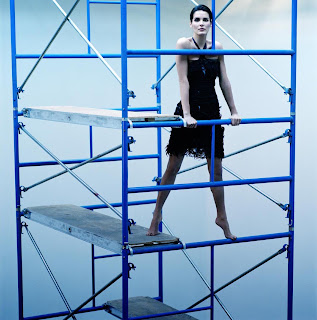 9. I find it really unattractive when a person doesn't wear his or her seat belt. 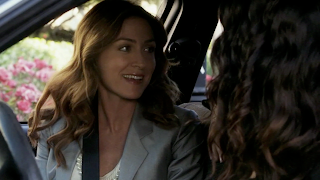 (P.S. Rewatch this scene to note the continuity error of Maura wearing/not wearing her seat belt...)
10. Sometimes I say things that I know make me sound stupid just to make people laugh.
11. One of the first things I do when I get home is take off my pants.

Sarah Shahi also likes to not wear pants apparently... Which I totally approve of. 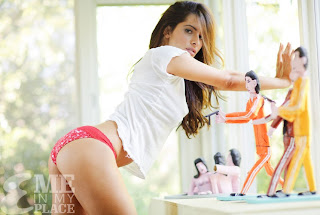 In other news: Grey's Recap coming tomorrow!
Posted by MormonLesbian at 6:27 AM

i'm so jealous that you get to watch Nurse Jackie season two on DVD
p.s. yay, new post :D

Oh my gosh, wife! Excellent taste in the man candy! And you are so sweet! I feel the same about you: you need that perfect woman for you in your life! Ha ha! Thanks! I loved finding out about your quirks and want to see this flamingo stance of yours sometime. Dinner at your place, hm? LOL!

Must say I love Nurse Jackie. Tonight I and the boyfriend are watching Ssn. 2 at our place.

(BTW-- too bad things didn't work out last weekend for you and your hubby to make it to Romulus' last weekend. I wanted to make another Grey's Anatomy friend).

@Husband--I am making you deliciousness at my house some time :D

@GMB--We will definitely have to be friends soon! Husband has said some very nice things about you :D