Jane, Maura, and the Brown-Eyed Girl

Sorry for the late recap. First, my computer was being a whore (well, actually it was being a prude, as it was denying all of my applications). Then I may have forgotten to post it :)
But this episode was a little serious (stolen kid, not cool), a little irritating (all sense of realism was tossed out the window with this episode), and a little lacking in subtext (even though I'm surprised Maura didn't start foaming at the mouth over trying to hump the missing girl's father based off of how she's been the rest of the season, she can apparently keep it together when a child's life is at stake)

*Seriously, never trust a lady that looks like this: 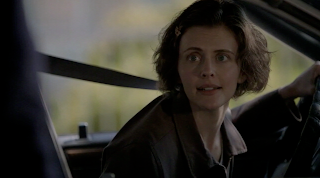 I mean, really... With that unkempt hair, she probably doesn't have a very good candy.
*Maura's cleaning lady shrunk her clothes (bless her heart).
Maura: Does this make me look fat? 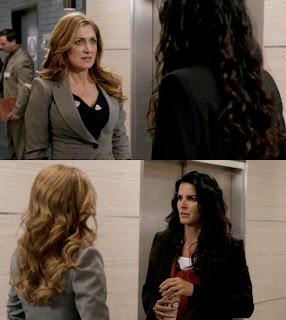 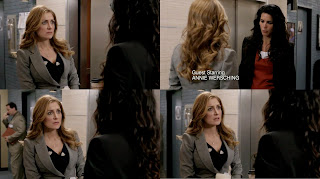 Jane: Maybe you don't have enough to do. (And I'm sure she has something in mind for Maura to do...) 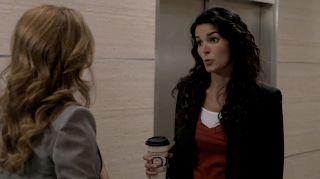 Jane: Let's go the gym! (Or somewhere else to "work out"...)
And they disagree about how they should exercise. 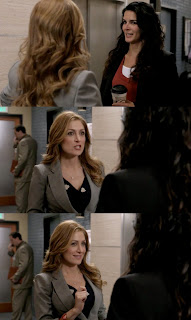 'Zumba' is a sex position, right? The one where you put your right leg over... never mind.
And then Jane suggests something, besides sex, that everyone can agree on: Beer. 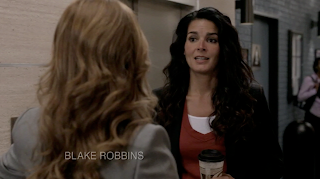 *Jane and Maura go off to interview the missing girl's brother about what he saw. 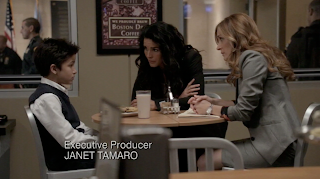 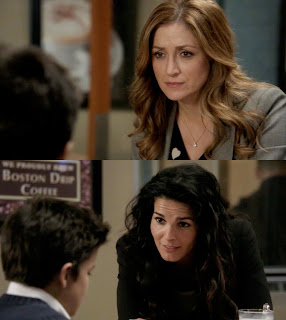 (Yeah, my recap is severely lacking because I couldn't deal with the shoddy policework and I refused to screencap Maura asking a corpse to help her with the investigation...) 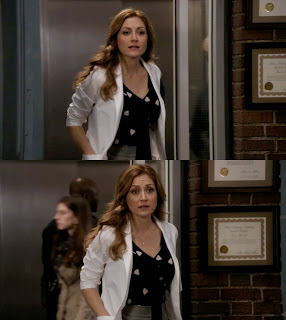 Maura: Jane, I want to show you something. (Now's not the appropriate time for that! Play "I'll show you mine if you show me yours" later!)
*Jane and Maura discuss how Jane is left-handed. 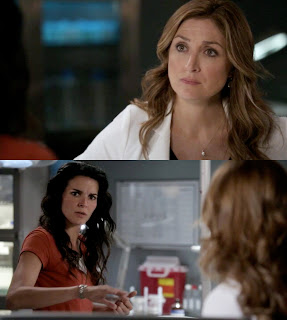 And you know what they say about girls who are left-handed...

*That awkward moment when Angela and Korsak have more eyesex in the episode than Jane and Maura... 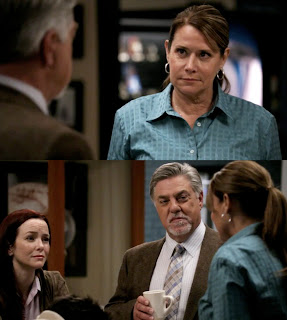 Well, Jane and Maura did have some very sad eyesex: 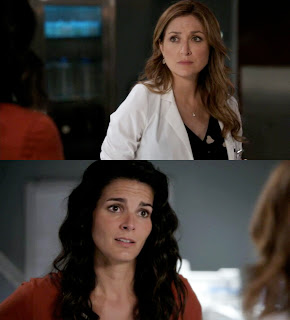 *Jane is talking to the father of the dead girl and Maura is creeping on Jane... 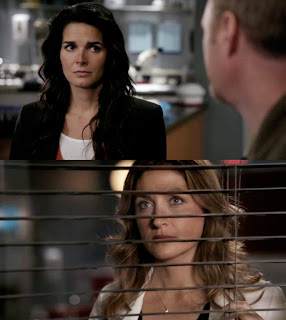 (Okay, that's not exactly what happened, but it's less depressing and better if she's just creeping...)
*More sad eyesex: 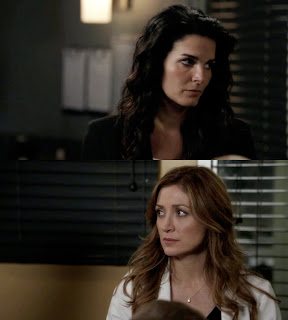 *Jane with gun makes me happy 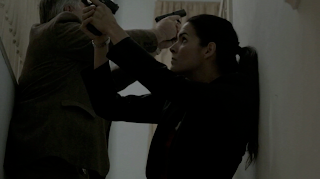 *Luckily the episode ends with some happy Rizzles lovin' 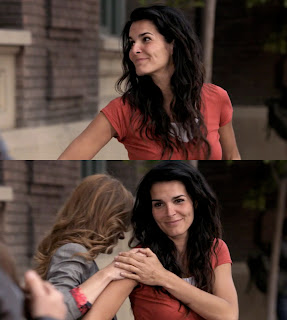 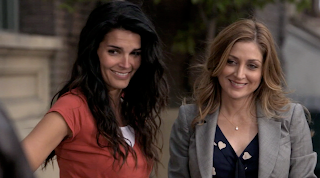 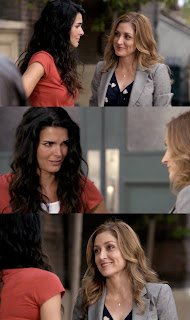 Posted by MormonLesbian at 2:56 PM

i was gonna tease you and say this post resembled Dorothy Snarkers post just because you posted it after hers but i can't get past how bad the post was xD and it's not your fault, this was a really bad episode!! you did what you could with what you had lol

Yay! Thanks for putting this up, ML.

And, hey, why should you do all the work on the recaps?

I love how Maura and Jane can NOT stay away from each other at work. Since TPTB evidently don't like them going out for meals or holding sleepovers anymore, our girls have become nearly inseparable at work.

Maura pretty much gets elbow deep in this case because it matters so very much to Jane. She even says/pleas "I'm doing everything I can here," in case Jane doesn't realize how far out of her zone Maura is going. She's even talks to a corpse! lol.

Whatever Jane asks her to do, Maura doesn't fight her anymore. She'll do whatever Jane needs.

You have 1/2 a screen cap of it, but Maura can't keep her hands off Jane. Before they question the kid, Maura puts a comforting hand on Jane. And when she wants to ask a question, she touches Jane to interrupt her, rather than just asking a question.

Like you said she becomes an amateur psychologist (and babysitter!) when Jane leaves to deal with the little girl's parents. Hey, Jane, Maura has a job to do! But she loves you so much she's helping you do hers!

And Maura takes. a. guess. In the scene where they are examining the body of the young girl that was found, Maura looks at the sweatshirt stain and says, "I'm going to take a guess, Jane." Yes, she even says it so Jane knows what she's doing. Anything to move the case forward for Jane.

The last scene was great. Not only for the Rizzoli lovin' (as you so beautifully 'capped) but because of the meta message. There is Mandy's family: jubilant to be reunited. And then we see another, parallel family -- Maura & Jane -- reunited, glad and relieved to be together.

How did Maura know where Jane was? Who called her? Why did she go to Jane right then? Because she has to be with her in that moment. Maura's touch is as powerful for Jane as the fierce hugs that Mandy's family is sharing together. And that super, sultry response from Maura when Jane says I'm never getting married or having kids. "You think that's going to protest you?" I know my reaction is inappropriate, but rrrowr!

Okay, I've gone over board. Thanks for your recap. They are always great, even when they are short :)

Haha, I like your insights. However, personally, I don't like how they are inseparable at work. It bothers me how Maura is doing all of these things that aren't in her job description and totally departing from the realm of reality. Even if Maura was doing all that for Jane, they wouldn't let her, haha.

Love your site, love your posts, agree this episode was the pits and appreciate the little you gleaned from it. Am kind of amazed at the amount of "wow, amazing episode" responses on the web, when really, it was complete garbage and only served to remind me how much rubbish I'll watch if it involves a gorgeous woman (slave to Sasha, here).

After Dorothy Snarker's fab interview w Tamero on AfterEllen i wrote that we can forgive her for the show not being 'The Wire', but every week, I begin to question my loyalty a bit more... those actresses are begging to be awarded for still being compelling while being forced to deliver amateur hour scripts-from-a-xmas-cracker shit. Give Sasha an Emmy for reading this garbage convincingly, for fuck's sake.

If only SnuffNYC wrote the series, we'd all be happy.

Thank you for not just rolling over and accepting what Tamaro and friends have been trying to feed us this season! (Also, your comment made me laugh) No, Season One did not have the best writing ever, but it wasn't this bad. We at least got episodes like the pilot, Beast in Me, and Money for Nothing where we could overlook the ridiculousness of the crime aspect because of the awesome subtext/humor that didn't get campy, or more interesting storylines.

And I even think (if I remove my blinders that try and pop up because of the pretty) that the acting this season hasn't been as good either... (Angie acting more like Angie than Jane in some scenes and Sasha not being aware that her face and body are still on screen...) But I may think that because the characters have deviated so much from the last season... Seriously, love Sasha, but I think she needs to be talking to the writers and defending the integrity of her character. And if she doesn't see the departure they've made with Maura, I question her judgment... (And really, Sasha shouldn't get Emmy just because Tamaro shouldn't get her ego fed even more, even if indirectly...)

But of course I'll continue to watch the show out of the same twisted sense of loyalty as you. And for the hottness, of course.

And there does need to be a fan revolution of some sort to get Snuff and Crackinois writing on the show. But of course that would involve switching from TNT to Showtime... :)

I just have to say, wife, I love your screen caps for episodes. They always make me giggle :)

I can't wait for your recap of Don't Hate the Player. To quote a tweet, It's so gay even the dog is licking the carpet. :)

i can't wait to watch this episode online because if there is shoddy policework i want to know because even though i love me some rizzles lol i like a bit of realism too.